Cracked composite (plastic) through-hulls are a fairly common problem, as a walk in pretty much any boatyard will bear out.  Ultraviolet light is the main culprit here and while different brands vary widely in their susceptibility to UV damage, some are so poorly made they can fail within a year.  Although manufacturers began adding inhibitors to second and third-generation fittings to make them more UV-resistant, the older ones are still around and it's almost impossible to tell one from the other (one reason I view all of them with suspicion). 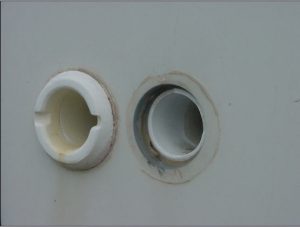 Composite through-hulls typically fail where the body of the fitting joins the outer flange, resulting in a crack or total failure (both of which are shown in the accompanying picture).  Once the flange is sheared off, there's nothing left to keep the through-hull in place, meaning it'll be pulled inboard, leaving an open hole in the hull.  Such failures at or below the waterline can easily result in sinking, however even those well above the waterline can be just as bad - as in the case of a bilge pump discharge, which now just continues to pump water back into the vessel, meaning the waterline rises till it reaches the hole and then...well, you get the picture.

Plastic fittings should be inspected at least annually. If you find one fitting that's bad, play it safe and replace the remaining ones too; they're probably the same age and prone to failure as well.