Here sailorman ingenuity has once again reared its hoary old head in efforts to sink yet another vessel. The handle of the bilge manifold valve pictured above broke off and was replaced with that venerable standby, locking pliers. Aside from the damage inflicted to the valve’s stem, chances are they’ll be “borrowed” by a crewmember for some other important task and never returned (a fact most likely discovered when the valve needs to be closed in a hurry). 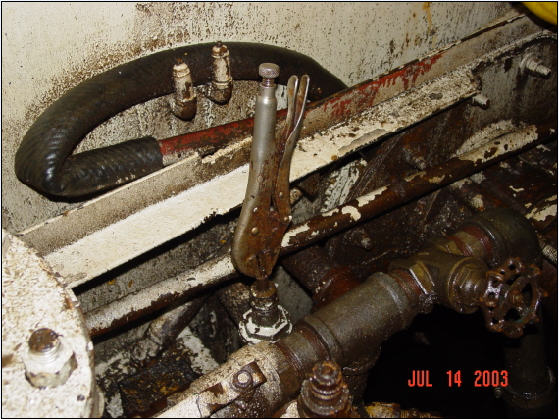 Gate valves are not recommended for use onboard to begin with, particularly below the waterline – their internal mechanisms are prone to corrosion induced failures and they give no visual indication of whether they’re open or closed as does a true seacock (a requirement of ABYC). Worse still, the valve can fail to completely close due to trash or debris, allowing water to enter the vessel even after being “closed.”

This vessel sunk while unattended at the dock a few months later, in part because a combination of trash and corrosion prevented the gate from closing properly. The damaged valve had been recommend for replacement during this survey and a previous survey two years prior.